A history of the Ace of Spades


a tale of currency and taxes

Why is the Ace called the Ace?
Why is the Ace of Spades so fancy?
Why, in most card games, can an Ace outrank a King and a Queen?
​
The story begins about two thousand years before playing cards existed, and before the first coins were minted. Ancient civilizations did not use money; they developed systems of barter by trading items and services. Because metals such as bronze, copper, silver, and gold have intrinsic value and can be divided, melded, and formed into convenient shapes, metal became an obvious choice of material for private, unregulated commerce, and later was adopted as an official way to pay taxes, fees, and fines.

Cattle and sheep provide meat and milk, and were an early form of proto-currency. Compared to these animals, metal is easy to transport, easy to measure, easy to store, and does not spoil, die, or need to be fed. Circa 800 BC, people in Italy and Greece used nuggets of metal called Aes rude as a more convenient way to pay. In Latin, Aes means bronze, and rude means unfinished. Aes rude is "rough bronze" and was a nugget of bronze (or copper and tin), most often weighing approximately 324 grams or 11.5 ounces, or about one Roman pound. The root word for "estimate" is the 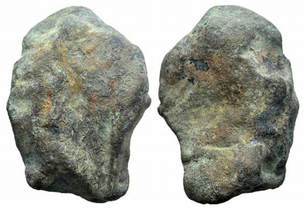 Æ Aes Rude, circa 8th-3rd century BC -- image used with permission from www.deamoneta.com
(Roman pounds at that time were usually called libras, like the zodiac sign Libra, which correspondingly has the symbol of a scale, and from which we get the abbreviation lbs. Libras are still used in Spain and Portugal.)

From Latin aestimatus, past participle of aestimō, older form aestumo (“to value, rate, esteem”); from Old Latin *ais-temos (“one who cuts copper”), meaning one in the Roman Republic who mints money

​During the Roman Republic (509 BC to 27 BC), metal was shaped into ingots or bars, initially without any official stamps indicating the pureness, quality, or precise weight. Of course, this lead to fraudulent activity, so mints were established to produce coins. Someone who minted money during this time was known as an ais-temos. The first metal coins were pieces of metal that were assessed, weighed, and stamped.

In ancient Rome, an As was a unit of weight, and copper was a material of choice for coinage. Around the first century AD, the “As” was a copper coin weighing about eleven grams (approximately the weight of a Kennedy half-dollar), and it was the base single unit of currency. The “Ace,” being the number one in a deck of cards, has a name derived from that single unit, serving as a reference for the other cards in the suit.
Although no one knows for sure where and when playing cards were invented, most accounts point to either India (which had circular cards) or the country where paper was invented, China (which had cards that resembled skinny dominoes or mahjong tiles). Playing cards have been in use for about 1000 years or possibly a lot longer. Likely, they were invented to play games. Maybe they were initially used by fortune tellers to divine the future or by magicians to entertain.
They were introduced to Europe during the thirteenth century from the Middle East. Initially, there wasn't a standard for what cards were in a deck. Yet some of these early packs already resembled modern-day pasteboards with fifty-two cards, thirteen in each of four suits. Some decks had suits of swords, cups, coins, and polo-sticks, whereas others, such as those from Germany, often had suits of hearts, bells, leaves, and acorns. The current suits of spades, hearts, diamonds, and clubs first appeared in France circa 1480. People brought these French cards to England, and our cards in the United States are based closely on those.
Just as there are taxes on the purchases of certain items these days, some earlier governments throughout Europe taxed the manufacturers and buyers of playing cards to collect extra revenue. Initially, the wrapper or seal on the deck bore an official government stamp, proving payment of the tax and guaranteeing the deck was new.
Written records indicate that in England, taxes on playing cards were raised in 1588, 1628, and several times thereafter. Over the years, playing card manufacturers made several appeals to the government regarding their loss of sales due to taxation. Imported playing cards were not subject to the same regulations. In 1643, playing card manufacturers posted their concerns on a broadside (the side of a ship, visible above the water line):
Order by Committee appointed by parliament for the Navy and Customs, on the complaint by the Cardmakers of London, likely to perish by reason of divers merchants bringing in Playing Cards into this Kingdom.
Merchants continued legally importing playing cards until 1684, when a public statement was sent from Whitehall Palace, the residence of the Court of London:
A proclamation prohibiting the importing of Foreign Playing Cards, and for seizing such as are or shall be imported.
Queen Anne was the monarch of England from 1702 to 1714. At the time, a deck of the highest quality cost about four pence, and a deck of the cheapest quality cost one halfpenny. During this time, the government proposed that each deck of cards would be taxed a duty of sixpence for the next thirty-two years.
The Cardmakers, along with the retailers and paper mills, petitioned against such an inordinate charge. One such request circa 1710 reads as follows:
Reasons Humbly offer'd by the Card-makers against the Tax upon Playing-Cards.
The Card-makers in and about the City of London are about One Hundred Master Workmen. For some time past (Paper having been double the Price as formerly) the trade is much Decayed.
The most they sell their Cards for to the Retailers (one sort with another) is Three Half-pence the Pack, and their Profit not above an Half-penny. So that the Tax intended will be double the value of the Cards and six times their gain.
The generality of the Card-makers are Poor men and out of the Small Gains above can hardly maintain their families: And therefore to impose a Tax to be immediately paid upon making by the Cardmakers (whose Stocks and Abilities are so very mean, that they now make hard shift to forebear the Retailers the Ordinary time of Credit) will be a direct way to Ruine these Poor Men.
Besides there is at present a Stock of Cards in the retailers hands sufficient for the consumption of Four or Five year; and they will assuredly sell all the old stock off before they take any at the New advanced rate: The consequence whereof will be:
First. That the Cardmakers till that stock be sold off can make no new ones.
Secondly. That during that time they and their Families must needs starve.
Lastly. That until the card-makers can make new ones no money can arise by such Tax.
Parliament was was not swayed by this appeal. On June 11, 1711, the Act became law. Taxes collected were "for carrying on the war, and for her Majesty's Occasions."
From 1712 until about 1718, a “duty stamp” was placed on one card in each deck to prove that duty tax had been paid after the wrapper had been discarded. Initially, no standards specified which card would be stamped.

Because the Aces had the most white space of any card, the duty stamp was usually made on one of them. The customary order of cards in a new deck has the Ace of Spades on the face (the top, if the deck is held face-up), so the Ace of Spades was the card most often stamped. The Ace of Spades was printed with a regular size pip in the center, and subsequently, officially stamped before sale. Some of the stamps had a round space that would encircle the center pip, while others had embellishments that may have somewhat obscured it. Despite this added fanciness, the aces (or in some decks of the time, the ones), remained the lowest rank in the deck for most card games.
In 1765, the Tax Office began printing Aces of Spades. Playing card manufacturers were not allowed to sell their own. It was a capital offense to forge an Ace of Spades. The designs for the various taxes, based upon the cost of the pack of cards, had an enlarged spade pip in the center of the design. The large spade both clearly identified the card as the Ace of Spades and became part of the official stamp design. This is how the Ace of Spades got a big spade in the middle.

Ace of Spades design circa 1765,
one of several printed by the Tax Office
Inequitable taxation and power struggles at this time in Europe were not limited to English Cardmakers. The French Revolution of 1789–1799 brought the bourgeoisie and proletarians in direct conflict against the monarchy. As a representation of the lower classes overthrowing the royalty, the lowly ace rose to power as the highest card in many games, outranking kings and queens. The ace now had additional significance for card players.
By 1825, playing card taxation in England had risen fivefold, and evasion was rampant. In 1828, the government lowered the tax from two shillings and sixpence (30 pence) to one shilling (12 pence) with hopes of retrieving more money. Aces of Spades were no longer printed by the Tax Office, but by Perkins Bacon on behalf of the Commissioners of Stamps. Because the duty was now charged on the card, and not on the wrapper, Aces of Spades were as official as currency. The central pip on the Ace of Spades was therefore much more sophisticated, with detailed drawings that looked as if they were on currency. Elaborations around the pip included a crown at the top, intricate circles, leaves, a lion, and a unicorn. Below the large emblem, the Ace of Spades was imprinted with the name of the manufacturer.

Ace of Spades design circa 1828
("Old Frizzle")
In 1862, the proof of duty was again reduced and moved back to the wrapper. Playing card manufacturers began printing their own ornate Aces of Spades, which often included their own name. They looked similar to modern-day Aces of Spades.
At about the same time, the United States began using Internal Revenue tax stamps on boxes or wrappers of playing cards.


United States Internal Revenue Stamp,
this type in use from 1940 to 1965
(from the collection of Rob Mendell)
Almost a century later, in 1960, the tax wrappers and duty were no longer collected in England. Five years later, the United States followed suit, abolishing the tax stamps, but the tradition of the fancy Ace of Spades is carried on to this day.
The standard deck used today in the United States today is mostly an evolution of decks used in England, a country still ruled by a King or Queen. Many European decks do not have a fancy Ace of Spades. However, in some countries, notably Belgium, all four Aces are decorated with pictures of outdoor scenery which are different at each end.