About Me / Frequently Asked Questions 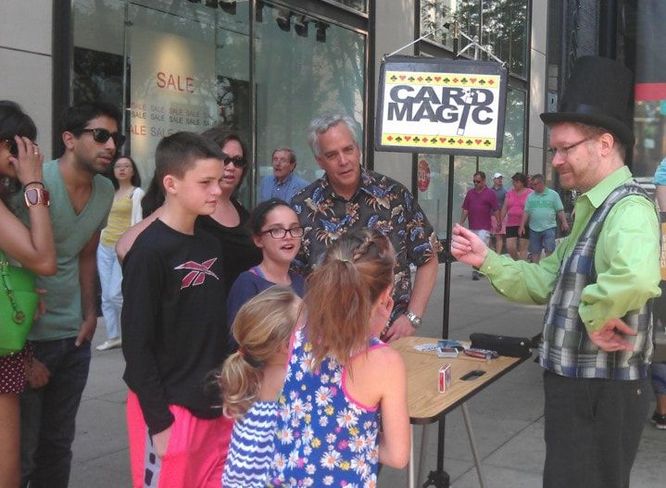 Performing as a Busker
​Magnificent Mile (part of Michigan Avenue), downtown Chicago
​FAQ: How long have you been performing card magic?
A: Since the summer of 1973. That's 47 years.

FAQ: How did you get started in card magic?
A: Do you know the name Doug Henning? He was a magician from Canada who was, in my opinion, one of the forces that brought magic back to being cool during the 1970s, after decades of it being considered old-fashioned.

Like anyone famous, Doug Henning had an attorney, and his attorney had a son named Danny. Doug taught Danny how to do magic. During the summer of 1973, I was at an arts and performance camp in Ontario, and Danny was in my bunk. Danny showed me card magic. I knew that if I learned this art it would change my life, and it did. I was mesmerized instantly and hooked forever. Then Danny and I went to a magic shop in Toronto. He suggested a couple of books for me to have so I could get started (yes I still have them); I also bought some regular cards and a special deck too.

The following year, Doug Henning's groundbreaking "The Magic Show" opened on Broadway and ran for 1,920 performances. Doug helped change the world’s perception of magic with this terrific production, which I saw live.
​
FAQ: Performing card magic changed your life?
A: Indeed it did. For one thing, my Myers-Briggs ​Type Indicator went from Introvert to Extrovert.

​FAQ: 1. How long have you been a street performer, and 2. Why do you choose to be one?
A1: I've been a busker for about a dozen years.
A2: The street is usually where I try out my new material to see how well it plays, and develop the finesse and fine points of the scripting. While the street can be a challenging, variable, and highly unpredictable venue, I love the randomness and aliveness it provides. I also use the experience to connect with potential clients who I wouldn't otherwise meet; some folks who I've entertained on the sidewalk have hired me to perform at their wedding receptions.

FAQ: Have you performed outside Chicagoland?​
A: Yes, I have cards with me almost everywhere I go. I admit that it's a bit of an obsession. I’ve had the great honor of performing at “Magic Corner” in London's Covent Garden, a street performance mecca since 1662. I’ve also performed on the Third Street Promenade in Santa Monica, Faneuil Hall Marketplace in Boston, Times Square in New York City, and 16th Street Mall in Denver, plus many other locations in the United States, plus France, Mexico, Canada, and Kenya.

FAQ: Do you perform magic other than cards?
A: My repertoire does include a few effects of mentalism.

FAQ: How do you learn?
A: ​I learn mostly from books. I have bookshelves crammed with card magic books and pamphlets, DVDs, videotapes, and many boxes full of cards (see samples in the picture below). I've taken lessons. I attend lectures and shows by other magicians, and sometimes learn from online tutorials. I occasionally create my own pieces of Card Magic too.

FAQ: How do you get good at this stuff?
A: Study, practice, script, rehearse, and perform for real people. See what works for your audience and your character, make the most of it, and practice some more. Be willing to learn and to grow and take some risks, knowing you'll sometimes have to learn the hard way. Watch, listen, observe, and adjust. Get creative and stay curious.

I've also done Toastmasters (for public speaking), taken improvisation classes at Second City, Annoyance Theater, and ImprovOlympics, been in plays, attended mediation training (to understand communication and conflict), and done lots of deep self-growth to gain new perspectives, to understand my audiences better, to let go of unhelpful judgment, and to know who I am and who I want to be in this wonderful world.

FAQ: Do you teach card magic?
A: Yes. Usually, I teach individual beginners, but have sometimes taught small groups. It's fun! 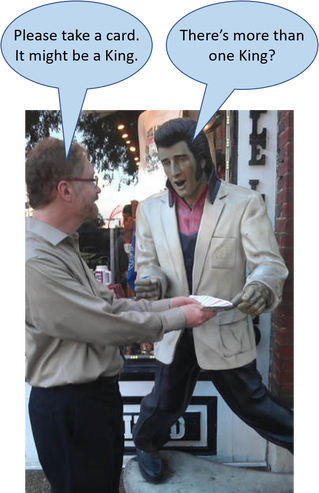 ​It has been quite some time since I've seen card magic up close and personal like this, and I can tell you I was astonished! As an adult, you look from afar or think back in time and presume there must have been some "trick up the sleeve", but Rob brings back that childlike amazement of something right before your eyes! I highly recommend him for events for both children and adults, all will be thoroughly entertained and left wondering.
— Sue Koch, Social Media Marketing Strategist and Professional Speaker -- yelp review